The robots are coming! (for the construction industry)

A friend of mine at Amazon recently sent me a link to this neat chart that was posted recently on a site called Dusty Robotics. It maps out different disciplines across the construction industry (from excavation and foundations to surveying, data capture, and prefab/modular project delivery), identifying startups that are applying robotics technologies within each of these verticals. 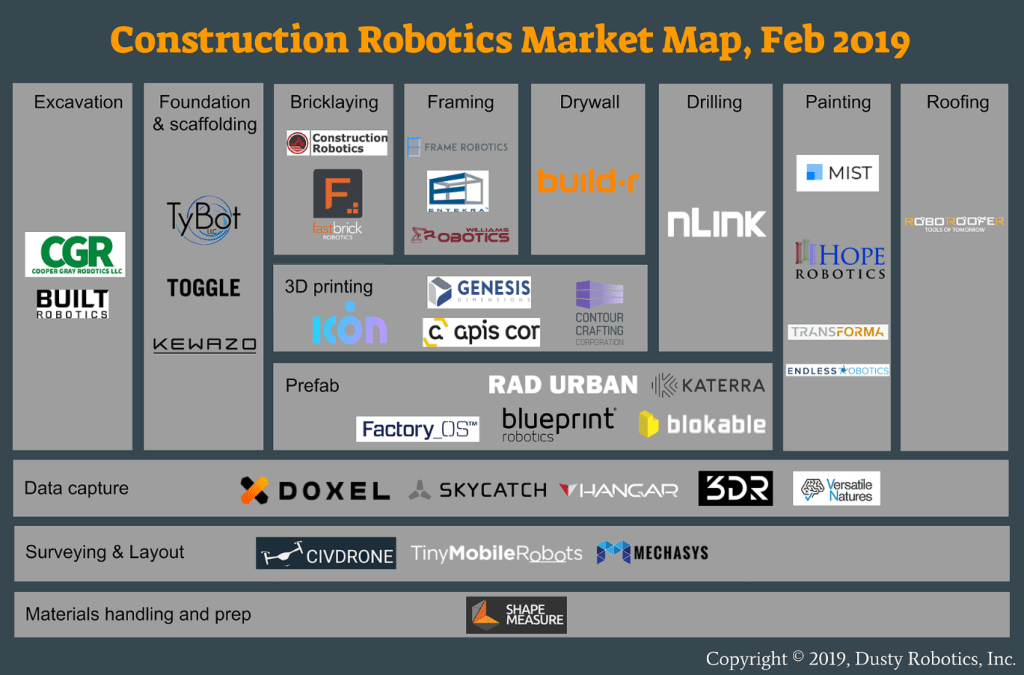 In addition to making for an interesting visual, the chart – created by Tessa Lau, and which you can access directly here – suggests some interesting points about automation within the AEC industry. If you believe – as I do – that our industry is both inefficient and stuck in a twentieth-century paradigm, then automation could be the elixir that boosts margins and streamlines processes. Here are a few more specific thoughts about the intersection of robotics, automation, and the future of infrastructure:

In general the idea of automating workflows across many disciplines within the industry is obviously key to improving efficiencies. With margins so low and risks so high, any opportunity to replace human-driven processes, whether in the field, the home office, or if the worker is a cost or profit center, will gain increasing traction. Nationally, construction costs have increased over 4% each of the last 4 years (higher locally) while major infrastructure projects – like the Gateway Tunnel here in the New York City area – are repeatedly kicked down the road. And aggressive owners continue to actively push risk downstream to their design and construction partners with impunity, leaving project teams with little room for error if they hope to turn a profit against already tight margins.

Jetsons-style relief from these pressures is not on the imminent horizon; I think the idea of robots building bridges and highways is probably for the twenty-second century. But drones powered by blockchain protocols and IoT principles that could repair and maintain infrastructure assets (or even serve as the basis of the O&M piece of a DBFOM contract) are probably much closer than we think. For this reason, I would keep a close eye on the surveying and layout fields of Ms. Lau’s chart, and expect that she will augment it in short order with other AEC industry startups that are testing these kinds of applications.

To that end, I would also expect the “data capture” grouping to eventually blur into that cohort. Already, Doxel, Hangar, and others (including the Seattle-based startup unEarth) are using drones to map project sites and help project teams make better decisions about what’s happening in the field. It’s not a huge leap to expect that IoT could allow assets to start making decisions on their own.

Finally, it’s been a rough stretch for “integrated” delivery offerings on megaprojects in the US; both AECOM and Skanska announced at the end of 2018 that they would no longer pursue large infrastructure projects in an equity provider role. But I don’t think this spells the end of design-build (or P3, for that matter) by any stretch. That’s why I think the prefab field of the chart – highlighting firms like Katerra and blokable – will become increasingly crowded moving forward. Design-build, IPD, and other alternative delivery models are here to stay, particularly if technology can help owners deliver more straightforward programmatic requirements to design-builders and let them “go do.”

What do you think of this chart and my analysis? Are there any noteworthy startups in this space that Dusty Robotics missed? Let us know in the comments!